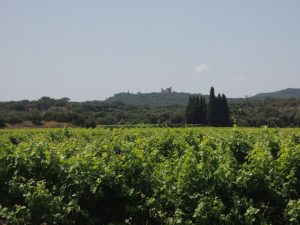 Half way between the cities of Avignon and Orange is situated the famous village of Chateauneuf du Pape. Today it gives its name to one of the most reputed French AOCs, but the name literally means “the new castle of the pope” due to the papal residency being transferred to Avignon during medieval times. The popes were known to be wine lovers, and as a result they gave a boost to the wine production of the region. Pope John XXII decided to build a castle as his summer residency, in the actual village of Chateauneuf du Pape, which remains a symbol of the village even today. 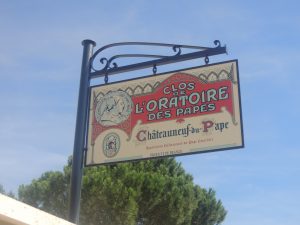 Chateauneuf du Pape wine appelation is the third largest AOC after St Emilion and Chablis, with more than 3200 hectares of vines spreading around the village, until Bedarrides and Courthezon. More importantly, it is the first to ever use the AOC term in 1936, when the wine syndicat of the region -inspired by the Roquefort AOC pioneers of 1927- decided to protect this very special terroir.

Sunshine is warming up the grapes each morning, while the mistral is carrying away moisture, a combination that makes sure tannins develop roundly throughout the whole summer.

The rolled pebbles dominate most of the vineyard soils and are highly responsible for the region’s high quality wines. These big stones that the French call “galets roulés” collect the warmth during the day and release it during the night, protecting the vineyard from extreme temperature changes. Additionally, the clay in the underground keeps the humidity that the vines need during the very dry months of summer. However, the secret lies within the combination of clay and pebbles, which allows the roots to dig into deeper and richer soil layers. 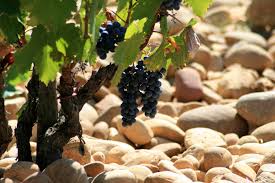 More than 25% of the vineyards are treated organically or biodynamically and the number keeps growing. The production is 90% devoted to red wine with Grenache dominating the blends, giving its fruity aromas and its velvet tannins, most commonly combined with Mourvedre and Syrah. Chateauneuf du Pape wines are characterized by red and black berry notes, high alcohol and moderated acidity. They can be enjoyed young because of their fresh fruity character, but are also able to age. 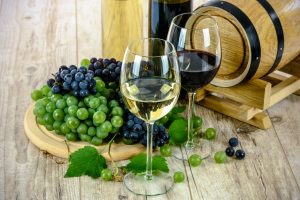 The Wine Bed & Breakfast is situated right in the heart of the village. http://chateauneuf-wine-bb.com

Some of the oldest wineries of the region: