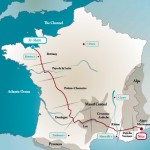 I just wanted to let you know how much I enjoyed riding through France for 2 weeks this September following your route.  It was a proper adventure.

My Mum lives in the Ardeche and I’d been talking about cycling to her house for ages (but avoiding the UK bit (I live in Perth)) and so when I stumbled across your book in the local Waterstone’s at the end of May this year I felt like it was ‘meant to be’ since the route actually goes through the wee village she stays in.  I’ve never done any cycle touring before and I thought having a route to follow would make life a lot simpler with all the things that need to be organised.

I decided with my lack of experience the 3 week itinerary would be the most realistic option, but I would get to my final destination in 15 days, giving me time to have a holiday when I got to my Mum’s too (I had 3 weeks leave).  So I got the train to Portsmouth, ferry St Malo and after a week in the Ardeche flew back from Marseille.  In the end I did the trip in 14 days, mostly due to meeting another cyclist in Mende (Simon) on my last night camping who was doing the 2 week itinerary and so I cycled with him from Mende to St Alban Auriolles – that final day is amazing – downhills that go on forever on quiet roads and climbs that are manageable even with a laden bike.

I think the only thing that I would add to the book is a wee line about being aware that in the shoulder season campsites/restaurants might not be open.  It wasn’t a huge issue but any extra miles at the end of a long day feel hard.  But mostly the whole experience was incredibly positive, the camaraderie of all other cyclists on the road, the greater courtesy that French drivers have to cyclist, the fantastic nature of the route following river after river exploring many parts of France I don’t really know – I thought the Lot valley in particular was brilliant.

I suspect the weather helped (13 and three quarter days of wall to wall sunshine then a drenching just as we left Les Vans) but I do think the route is well thought out.  I did undertake some ‘edits’ to my journey (as you suggest, making it my own adventure) as I used traditional maps for navigation, some of the editing was just evening out the day lengths on the itinerary so they were closer to fifty-ish miles – as I found they varied a fair bit.  I also chose not to take the rest day but to do 2 shorter length days as I’m not sure I would have managed 74 miles and 1500m of ascent with my adapted mountain bike (road tyres) and camping kit, especially over Goudard pass.

I would (have already) recommend the book/route to anyone interested in touring or just exploring France generally.  It is a fairly hefty tome for cycle touring with but I did enjoy looking at my maps and the book of an evening to see what the next day had in store.  I didn’t have the book out during the day but quickly learnt that some of the salient directions for getting through towns noted down on a bit of paper with the map made navigation pretty straightforward. I know there’s lots of digital ways of doing these things but the maps gave a better sense of where I was and also let me adapt the route a little. 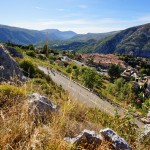